By Han Hui Hui 韩慧慧 July 16, 2013
In 2009, a total of 401 confirmed suicides were recorded. 267 of them were male, while the remaining 134 were female.
The suicide rate increased from 8.76 per 100,000 residents in 2008 to 9.35 in 2009.
These figures were revealed in a press release by Samaritans of Singapore (SOS), a confidential hotline for people in crisis.
Young men in the age group of 20-29 were found to be at high risk of suicide. Those who called in to the SOS hotline talked about difficulties and anxieties in coping with life's stressors. 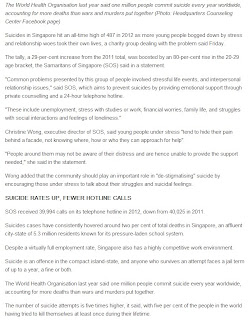 During May, I went to the alternative media telling them that suicide rate has increased especially in the younger generation but the news didn’t get out because I don’t want to show the facts.
I’ve to protect the victims.
Now, two months later, the news is out.